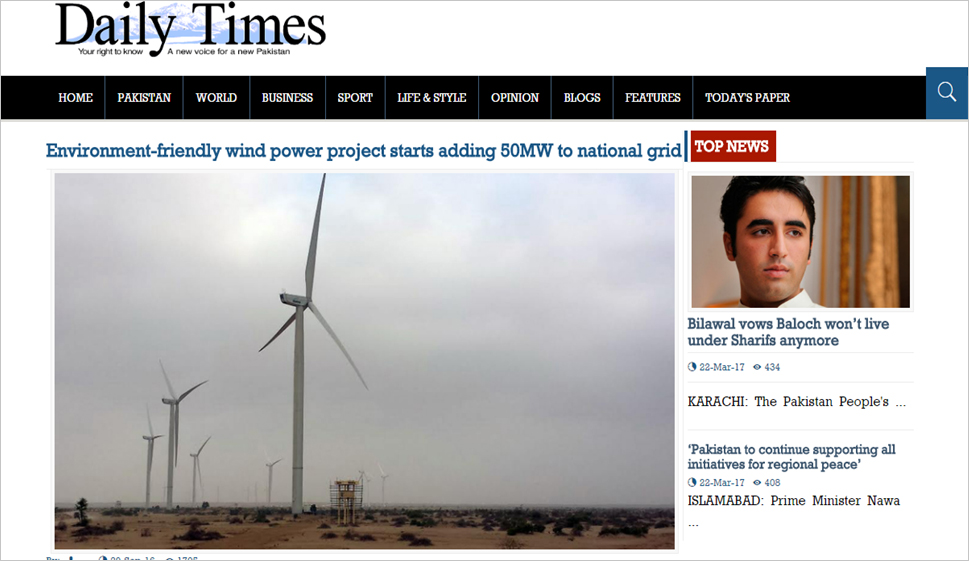 The project aims at providing a sustainable tariff at a fixed price for 20 plus years. It is noteworthy, that the private sector has come forth to tackle the challenges currently being faced in the energy sector due to electricity shortage throughout the country.

The 125 million USD project is already generating 150MW of wind power and has now started producing an additional 50MW and from the next month it will start producing another 50 MW of power from wind energy. This 50MW project is established over 1500 acres having 20 turbines with 2.5 MW capacity of each. “We were ready to produce power from our wind project several months ago, but due to the non-availability of the grid, we couldn’t start, but the gird started since last month, so now we have started the power generation,” said Danish Iqbal, CEO Metro Power Company Limited told Daily Times, adding that he is thankful to AEDB, Government of Sindh and Central Power Purchasing Authority in providing full support to allow project to reach this major milestone. Wind power is an indigenous resource in the province of Sindh, electricity generated through this technology reduces the impact of variable transportation cost and imported fuel costs such as LNG & HFO on electricity tariffs for longer periods.

The project has been sponsored by leading Pakistani business family Iqbal Ali Mohamed & Family, Infraco Asia Development Pte Ltd from Singapore and International Finance Corporation (IFC). The Project has installed state of the art twenty 2.5 MWs Wind turbines made in Germany and European made Balance in the Plant. The Project complies with all HSE International environmental standards and requirements. The group is also planning four more renewable energy projects with indigenous resources of cumulative capacity of 210 MWs as soon as the evacuation dates for grid is provided by Purchaser. Sindh has enormous potential for Wind Energy resource which if tapped can generate more than 43,000 MW from the Wind Corridor located in the costal belt, which spreads from Gharo to Jhampir and is around 60km wide and 180km long with average wind speed of 7-8 meter per second.

A recent study conducted by Pakistan Meteorological Department (PMD) to ascertain detailed Wind Power Potential by surveying of Coastal Areas of Sindh and Baluchistan in collaboration with Pakistan and Ministry of Science and Technology reveals that Sindh coastal areas have greater wind power potential than Baluchistan coastal areas. “The potential areas cover 9700 square kilometers in Sindh and the gross wind power potential of this area is 43000 MW keeping in view of the area utilization constrains and the exploitable electric power generation potential of this area which is estimated to be about 11000MW,” the study disclosed. The demand for energy has increased in tremendous proportions in the last few decades in Pakistan, which is expected to increase further in the coming years. The primary sources of energy available in Pakistan are oil, natural gas, hydro and nuclear Power. At present oil accounts for approximately 45 percent of total commercial energy supply. The share of natural gas is 34 percent while that of hydel power remains roughly at 15 percent. In such conditions, when government has started controversial power generations like coal power generation, the environmentalists are opposing it, but wind power is much more environment friendly. The wind energy is considered as an ideal renewable energy because it is a pollution-free, infinitely sustainable form of energy, it doesn’t require fuel and it doesn’t create greenhouse gasses it doesn’t produce toxic or radioactive waste. Wind energy is also quiet and does not present any significant hazard to birds or other wildlife.

Has Previously been a member

Has completed Bachelor of Science in Business Administration in majors, management and marketing from American University of Sharjah, U.A.E.

Has Previously been a member

Fellow Member of the Institute of Chartered Accountants (England & Wales)

The HUBCO (The Hub Power Company)